Further to Part One of this 2 part blog, here is some more food for thought if you are taking promotion preparation seriously…

Begin with the end in mind

When I sat my first promotion board I didn’t know how to prepare. Consequently I was not in a position to maximise my potential. Over twenty years later, little has changed because it appears that a great many officers – with real potential – still don’t prepare effectively. When they do start, it’s often too late to realise their potential. Unsurprisingly, they are unable to convert personal leadership aspirations into promotion success.

However, it can sometimes be quite difficult for officers to acquire initial support or assistance. Some key information to work through at your convenience and to identify any gaps you may have can really help in building your confidence. One of the benefits my successful candidates frequently feed back is that meaningful direction and signposting at the outset serves to help channel personal drive into effective preparation.

Achieving goals in any area of life is ultimately about taking action. If you aspire to promotion, ‘How to Pass your Police Promotion Interview’ is a toolkit to help you take action and to begin with the end in mind.

Getting it right – first time – is always the aim. But promotion is a journey and there are no guarantees.

Some wait for an opportunity to come along and only then start preparing. Others are actively working on their goals right now. Some will achieve promotion shortly after setting off. Others may be a couple of stops from success. Working smart from the outset is a good approach whenever you choose to start.

The aim? Be so good and prepare so well that they can’t refuse you!

Character and resilience often separate those who succeed from those who give up along the way. Some run out of will. They fall by the wayside, frustrated, bewildered and disappointed. The journey ends there. But just imagine for a moment that you were heading in the wrong direction all along. Even worse, no one was there to point it out to you. That happens a lot!

Wanting to ‘give it a go’ first is something I understand. Cops do that. A ‘can-do’ attitude.

Whilst that works well in other areas, it might not be the wisest path given reducing vacancies and increasing competition. Some candidates try again repeatedly, using the same approach each time. In doing so, they can be blind to the ‘gaps’ which with some help can be identified quite quickly. On this point, I am often contacted by candidates who have been unsuccessful on previous promotion boards.

Perseverance is a subject I have blogged about before. I was prompted to write on that occasion by a Temporary Detective Inspector, who contacted me having tried four times over eight years to achieve substantive promotion. It took just a couple of hours one to one support to identify and recognise ‘gaps’ that were holding him back.

Having paused for reflection, his journey resumed and success followed at the next board.

Sharks need to move forward continuously to stay alive. Focusing on personal and professional development helps you move forward as a leader, manager and supervisor. Be a shark!

Motivated cops. Qualified. Full of potential to succeed. Within reach of success and with much hard work already completed. That being the case, it is always surprising when I see individuals unwittingly sabotage their chances of continued success. By that I mean passing OSPRE and then easing off the accelerator. Getting through an application or paper sift (with all the hard work it entails), without then preparing effectively for interview.

A rest may be well deserved but regaining momentum can be difficult. Investing in continuous personal development (CPD) is for some officers a new concept. Other officers are quite familiar with CPD plans – but don’t have one in place! Driving your own development is important.

What have you done to develop yourself or anyone else in the last 12 months?

It’s a fair question. It’s also one you might reasonably anticipate in a promotion interview!

As a shark, you’ll be moving forward… to anticipate this and other questions.

Recognising evidence is something cops are quite good at, except that is… when it applies to their own promotion application!

Marshalling and structuring your evidence, ensuring alignment to the relevant promotion framework and other criteria can be a source of frustration. It is possible to improve skills quickly but not everyone finds it easy. It’s an area that many officers seek support with. If you are lucky your force may help, but more often than not it’s a case of…work it out yourself.

When you do ask for help HR departments refer you back to the application guidance itself! This may be partly due to the requirement to remain neutral but also because these are rarely short conversations as many supervisors will know. Helping an officer with a promotion application can often take hours. With the best will in the world it is not possible for HR or supervisors to provide as much support as they would like to do.

In reality, many officers are simply too busy ‘doing’ the job to stop and think about writing anything down in the context of what may be required to support their promotion application. Allowing yourself as much time as possible to become familiar with a selection process can help a lot. Certainly in reducing anxiety owing to associated tight deadlines. Your examples are the foundation of your promotion preparation.

A competence based application and/or interview is a test of your wider communication skills. Understanding the role behaviours you aspire to is key to supporting a good written application or interview. The best part of a week is not unusual (as a minimum) to draft examples so making a start sooner rather than later is wise.

Failing to plan is planning to fail. No one intentionally plans to fail, so being able to access timely guidance and support can be extremely valuable if you are one of those taking promotion seriously.

Wherever you are on your promotion journey www.ranksuccess.co.uk can help with guidance and support.

3 thoughts on “Are You Taking Promotion Seriously? (Part 2)” 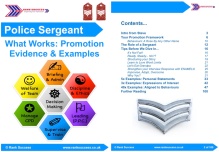 Solid examples of what works for Sergeants 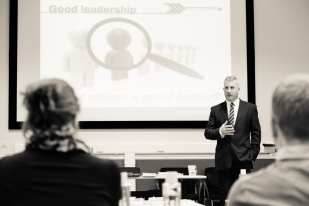 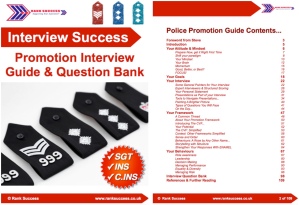 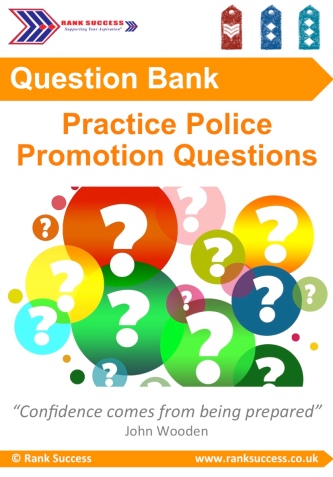 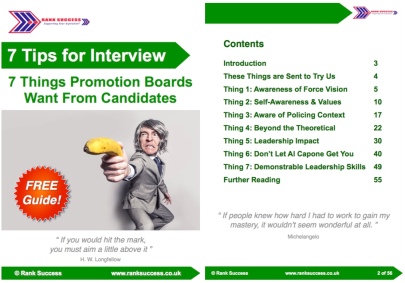 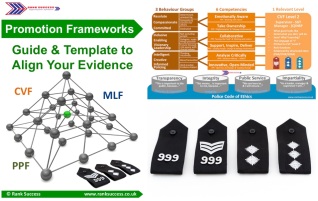